I left Raleigh at about 5am Saturday morning, and until I got to about Vanceboro, there was some of the most dense fog that I’ve ever seen. Seriously dangerous driving conditions. The weather at the field was just as predicted by most weather apps, but the clouds seem to break about once an hour, so we still got some flights in, and I’ll list them in the table below. As you can see, the high power pads were getting some serious love. Good stuff!

Jim Livingston brought out his freshly repaired LZ rocket and flew it on an 38mm I motor made with a very exciting mixture of Ferric Fudge and Jim Scarpine Tribute Blue #4B(JSTB). For those who don’t know, both of these propellants are wickedly fast and this motor turned in about a 0.5 second burn. Explosive, almost! He also flew his 5.5″ diameter SeaHawk on a K-560 made with JSTB #4B for a perfect flight. Alan Whitmore was on site with his Astro Mollusk VII and flew it with a 6 grain I motor filled with his Ferric Fudge propellant. I think I overheard him say that this flight was #85 or #86 for that rocket, impressive! Brent Bierstedt flew two rockets; a finely finished V2 on a KBA K-1750R and a beautiful Patriot Missile on a Loki J-320R. Dennis Hill flew his scratch built Army Hawk on an Aerotech H-180 for a perfect flight. He also flew one of David Rushing’s old kits he acquired some time ago for an out-of-sight flight on a 25 year old Aerotech H-45W long burn motor. Allan Rose came out and launched 3 rockets – his IROC on an Aerotech I-211W, his Minnie Magg on an Aerotech H-123W, and his Mongrel on an Aerotech J-540R. Joe Hill flew his 4″ diameter rocket that he calls Iron Moon on a CTI L-1350C* for a very fast/high flight, and after some extensive searching, brought it home with the help of his Marshall tracker and a farmer that happened to be wayyyy out in the field. Kurt Hesse flew his reliable 4″ diameter Performer 98 on a homemade 4 grain 54mm motor stuffed with CP4 propellant which came out to a K-1100ish with no problems.

Mike McKeon has caught the HPR bug in a big way and put up an extended version of his already built Zephyr on an Aerotech I-285R for his first attempt at using electronic two stage recovery. After a few adjustments to the size of his ejection charges, he got it figured out perfectly. Good job, Mike! Dorsey Delavigne launched his first all fiberglass rocket, Viper, on an Aerotech H-135W and as I recall, it hopped off the pad pretty quickly. Matt and Morgan Willis made the trip down and flew one rocket each. Morgan flew her 5.5″ diameter Psychedelic on an Aerotech K-400C and Matt flew his scratch built Level 3 project on an Aerotech L-875DM sparky motor as test flight. Both rockets came home safely. 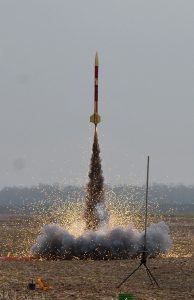 A couple people came out and made use of the low power pads, especially Allen Harrell. He flew 5 different rockets, including a two stage, on various Estes motors ranging from Bs to Es. Eddie Haith flew his XL Hi Flyer on a D12-5 and Jeffrey Daniels flew his Smithsonian Member on a B6-4.

Everyone has their own particular likings when it comes to this hobby, and I’ve always appreciated those who have done the hard R&D to figure out how to do clustered flights, two stage flights, or just flights on more than one motor in general. Having said that, Mike Nay and Paul Kraemer joined us and flew some really cool rockets. Mike put up his Loc Magnum on a central CTI K-515 Skidmark, and then air started two Aerotech H115DM sparky motors. He also flew his two stage rocket Double Shot. He chose a CTI J-780 White Thunder for the booster and an Aerotech J-135 long burn for the sustainer. Both flights were perfect. Paul flew his Loc Ultimate on a central Aerotech H-238T surrounded by six Estes F15s and his Loc King Viper III on three Aerotech J-180T motors which put out a beautiful bright blue plume.

Lastly, we had three universities join us – UNC Charlotte, NC A&T, and NC State. UNC Charlotte flew their project Olympus on a CTI L-730 Classic, NC A&T brought back their rocket called Pizza Planet on an Aerotech K1000T, and NC State flew their rocket called 81.5 on an Aerotech L-1520T. It’s quite evident that all these students are very passionate about their respective projects, and they all did a great job this weekend.

It was great seeing everyone on Saturday, and we’ll be out there again in two weeks. Join us if you can!