Weather was normal for the summer, hot and humid, little wind.  Flyers heeded my request to arrive early and fly early. We started at the usual 10AM and were done by 1:30PM, avoiding the real heat of the afternoon.

Starting with the August launch the start time is being moved to 9AM. I would like to be done by 1PM. If the schedule works well, we will probably use 9Am-1PM next summer.

We had another collection of Cub Scouts this month that accounted for most of the A-B-C flights. Not quite as many total flights as last month, but very respectable 52 flights in 3.5 hours.

I rebuilt the failed launch control box, so we had both launch banks (9 pads) working this month. The bad power supply cord for the PA system was also replaced, so I think everyone could hear the launch announcements.

Here is the usual summary of flights by motor size:

For the moon landing anniversary we had three scale Saturn rockets fly. John Allman flew his Saturn 1B on a cluster of four C6-3s. He also flew a Saturn V on an E28 with three parachutes. Both were Estes 1:100 scale I believe. Mike Collier flew a smaller (about 1:200 scale) Saturn V on a C6-5. They all flew successfully! 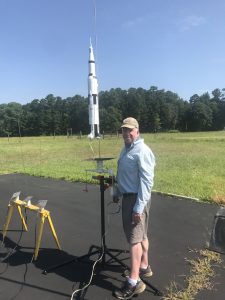 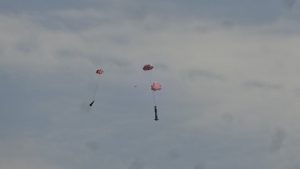 The Saturn under three chutes.

Out of four 13-mm motors flown this month, three of them failed. Aylie Lewis had an A10 and A3 CATO. Alexandria Dick had an A10 fail. All from different packages.  We don’t usually see the smaller BP motors fail that often. I think all of the rockets survived,  probably due to the small amount of propellant in those motors.  As a reminder, if you save the motor casing and send Estes some pictures, they will usually replace the motors. You should also report motor failures at motorcato.org.

Lauren Dick (11 years old) flew some rockets for the first time, along with her sister Alexandria. Lauren is gung-ho and wants to certify Junior Level 1 this fall. She will probably have Pro Series rocket ready to go for the next launch. They flew four rockets on a variety of motors from A-C.

As usual, Eric Noguchi flew a canard boost glider named Kestrel on a B4-2 for a good flight. Unusually, no two stage flights this month, and only the one cluster flight (John Allman’s Saturn 1B).

Allen Harrell flew the largest motor of the day, a G57-5 in his rocket named William. It used a Jolly Logic Cute Release for a successful dual deployment. Mike Collier also used a dual deploy Chute Release in his Grave Danger with an F39-6.

The Jordan High School rocketry team came out to practice flying TARC rockets, getting ready for the 2020 season. They flew some older rockets named Dictator and Squeyed on F39s.

Many thanks to Dr. Joe Lobuglio from NCSSM for helping at the RSO desk, and everyone (including the NC S State students) with set-up and tear-down and launch pad management.

Our last Butner launch of this year will be on August 24th. Please join us at 9AM.