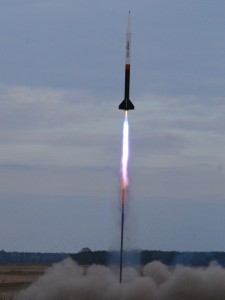 We had a fine weekend for rocketry in Bayboro this December, although the winds were “breezy” and the temperature in the mornings was in the upper 40’s to the lower 50’s.  Attendance was disappointing, but, given the weather predictions, understandable.  Let’s look at the motor use summary and then I’ll describe some details about a few flights.

On Saturday, the clouds were heavy early and the winds cold and damp.  But, with a forecast for lifting cloud cover and warming temperatures, we prepped rockets and hoped for the best.  And, just as predicted, the clouds lifted and got patchier, and at one point the sky was almost completely clear.  Flying picked up as the afternoon wore on and the best flying weather of the day was right before sunset.

Tommy Harrell is working up to larger and larger motors in his 2-staged Crazed Pink, this time launched successfully with an I540 in the booster and an H128 in the sustainer.  There were some scorch marks on the front of the booster, so that one may not have drag separated.  Alan Whitmore finally made his first 2-stage rocket attempt, using a booster that Larry Zupnic gave to Jim Livingston a few years back and which Jim had modified to accept a 38mm motor casing as a slide fit in the nose cone.  The sustainer is the Astro-Mollusk 7 using the Raven altimeter to control the 2nd stage ignition.  The flight was intended to start with a 2900 N.s L motor to a full I in the sustainer, but the second stage never ignited and became, briefly, a boosted dart before recovering safely.  4905’ recorded for the whole package.

By far the loudest flight of the day [or of any launch I have attended in the last few years] was Jim Livingston’s flight of Carbon High on a 3-grain 115mm M made from Alan’s new formula:  Jim Scarpine Tribute Blue #4.  The flame was bright and lurid and at least 11 feet long.  I’ll try to send a picture to Tanner and maybe he can post it on the web-site.  The exit cone of the veteran graphite nozzle was blown out in chunks, but the rocket soared on up to more than 9,000 feet, recovered after a short drive.

Scott Schnegelberger had 1 flight with an Art Applewhite 38mm Delta saucer and 2 flights with his 4″ x 7.5-foot Thing One.  The first Thing One flight used the brilliant Cesaroni I303 Blue Streak formula, which jumped off the pad.  The second flight was on a Cesaroni I216 long-burn classic white smoke motor.  One of the nose cone shear pins didn’t shear properly, and the main chute only came halfway out of the airframe, resulting in a free-fall from about 2300 feet.  Thing One suffered surprisingly little damage and will be repaired by January.

With darkness closing in quickly, Alan Whitmore flew the Generic Four Inch on a homemade 3-grain 54mm K motor and Jim Livingston finished the day off with a flight of his Carolina Sky on a 4-grain 76mm L motor that was predicted to reach the 12,000 foot range.  We got a weak signal from the Walston tracker but it was soon dark and that rocket has not yet been recovered.

The weather Sunday was just plain weird.  Jim and I got to the field at about 9:00 and looked for the Carolina Sky for about 45 minutes, and then I set up all the launch equipment.  The sky was 100% blue and the winds were dead calm.  Because of the full sunshine, it actually felt warm.  10:00 came and went and nobody showed up, 10:30 and 11:00, no people.  By the time rocket people began showing up the winds had picked up and began to blow hard, wet and cold.  I had to take a few breaks during the day to sit in my truck and get some feeling back in my hands.

But, lots of people showed up and they all had fun.  Mike Collier had 4 flights in the D to G range.  The most challenging of the weekend was an attempt to fly his Phobos  on a motor that Ken Allen had sold him packaged as an Aerotech G64W.  The propellant was swollen and discolored and didn’t fit in the liner tube without a lot of persuasion.  Mike burned 3 or 4 Aerotech ignitors on the load and it didn’t even chuff.  We took the motor apart, scraped the propellant and stuck one of David Bachelder’s little “twiggy” ignitors in it and it lit right up!  Big surprise – the smoke was thick black, and the burn was  rather slow.  Another one of those G33 loads that finds their way into a G64 package.  Mike also flew a brand-new rocket called the Polar Express made from plastic candy canes, some of last year’s Christmas decorations.  It flew very straight on a D21.

A new flyer joined us this month: young Cayden Dyer made the trip from Orlando to fly his Sky Writer on a pair of B6’s and both flights went extremely well.  Craig Anfinsen flew the largest motor of the day in his Endeavor Plus using the CTI K360 white smoke load for a beautiful flight.

Tanner Lovelace had another one of those flights where the motor wasn’t exactly what he expected.  He brought a Big Daddy that was loaded with what he remembered was an E9, but was stuck so tight we couldn’t get it out to confirm.  After the flight, when all the parts were warm, the motor slid right out and proved to be a C11.  Great flight, anyway.  Tanner also had a very impressive flight with his Escape Velocity using the very impressive J340 ‘metalstorm’ motor.

Andrew Billin returned to fly a variety of rockets and only lost one nose cone in the wind.  Dennis Hill pranged Joe’s Rocket when the parachute refused to come all the way out, but repair will be fairly simple for that one.

Many thanks to Mike Collier for the Krispy-Kreme donuts and to everybody who stayed to help with equipment teardown and trailer packing.